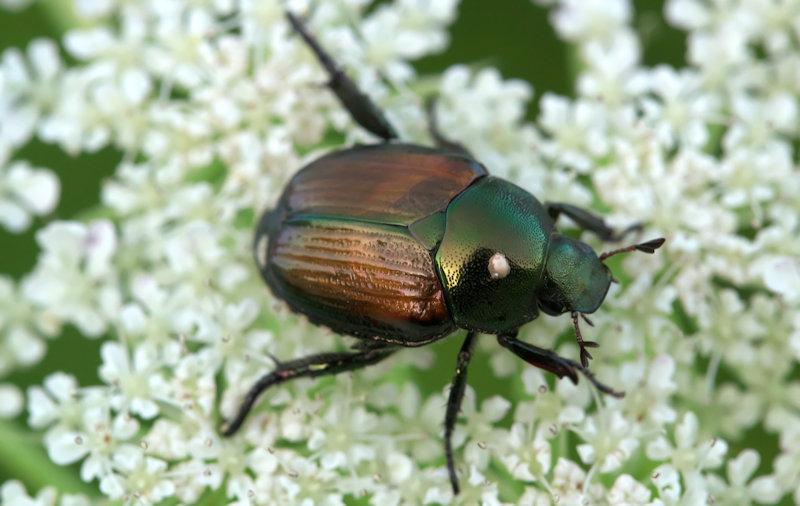 The Japanese Beetle (Popillia japonica Newman) is a widespread pest that’s known to destroy different types of plant life around most of the United States. Infestations can occur in the following areas:

In all, there are more than 300 different plant species that can host these beetles. Some of the most common primary hosts include maple trees, ornamental apple and stone fruit trees, and elm trees. Secondary hosts can include buckeye trees, chestnut trees, and birch trees, among others.

Usually, Japanese Beetles hatch around the 4th of July. Fully grown, they measure around 15 millimeters long and 10 millimeters wide. They have an iridescent, copper-colored forewings, called elytra. In addition, they have a green head and thorax.

Adult Japanese Beetles will feed on the leaves, flowers, and fruits of infested plants. When they’re still in the larval stage, the white grubs will work lower in the ground. These pests will feed on the roots of grasses, which can cause destruction across golf courses, parks, and homeowner lawns alike.

As its name implies, the Japanese Beetle is native to Japan. However, researchers believe this species traveled to the United States sometime in the early 1900s. The first known sighting was in New Mexico around 1912.

The most likely theory is that the beetle entered the country through a shipment of iris bulbs. During this time period, commodity inspections were not in place yet. As such, it would have been easy for the pest to slip in unnoticed.

Since that initial infestation, the pests have taken hold across the U.S. Now, the Japanese Beetle is established in most states that lie east of the Mississippi River, with the exception of Florida. It has also traveled as far west as Colorado.

Symptoms of a Japanese Beetle Infestation

If you suspect that you may have a Japanese Beetle infestation, then your first step should be to call a qualified tree service team in your area. These experts can identify the symptoms of these pests and guide you in proper treatment.

Note that while both adult and larvae beetles can cause damage, the symptoms will appear different based on the pest’s lifecycle stage.

Adult Japanese Beetles will feast on foliage, fruit, and flowers and are typically most active on warm and sunny days. Once they’ve taken hold, you may notice that the affected leaves appear to be skeletonized, with only the veins visible and intact. Meanwhile, larvae prefer to invade grass roots.

As they pierce these roots, they impede the grass’ ability to intake water. Faced to force the hot and dry summer heat without adequate hydration, the grass will die. You may notice brown, dead patches where beetle larvae are present.

What To Do About Japanese Beetles

If you have a Japanese Beetle infestation, there are a few different treatment options to consider. The best one will depend on a variety of factors, including:

There are a few insecticides that can help slow or stop the spread of these beetles. These are most effective in the spring, and can be applied as a trunk injection, foliar spray, or soil drench. To learn more about our treatment options and schedule a service, give us a call!